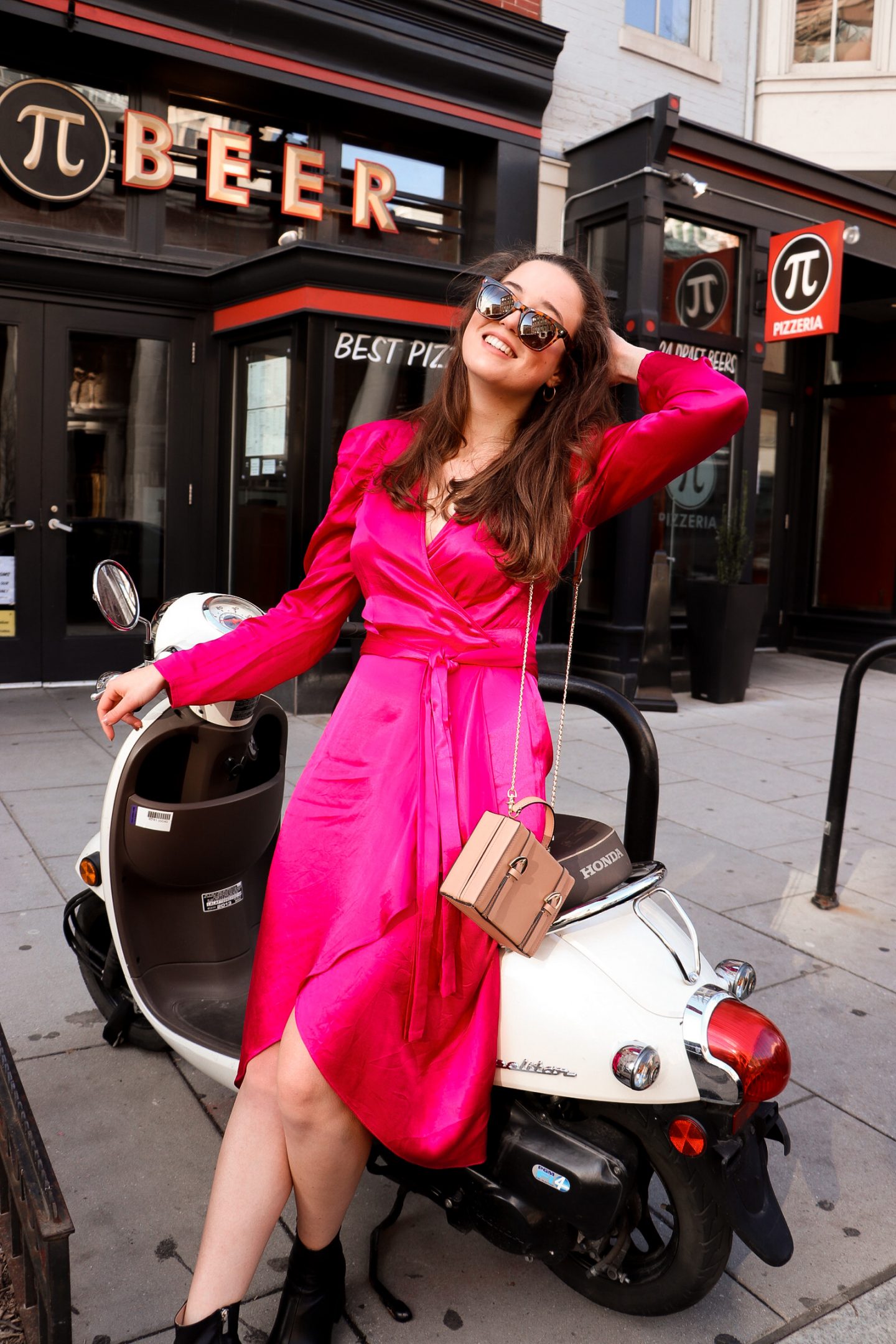 It was the iconic Elle Woods, immortalized on our screens by America’s sweetheart Reese Witherspoon who said, “whoever thinks orange is the new pink is seriously disturbed.” The entire film Legally Blonde taught a generation of young women that you can like pink and fashion while also studying at Harvard and kicking ass at law. It also created another line that has entered our popular lexicon of memes and references: “what like it’s hard?”

With 2012 we saw the rise of millennial pink in branding, interior design and even cars (if you don’t follow Lola Le Pink Figaro on Instagram, you have no joy). Its softer, warmer tone–compared to its Barbie predecessor– became the color of the people, even more so because pink was now androgynous. It was Wes Anderson’s Grand Budapest Hotel and drinks that will set you back 20 pounds per umbrella at the rosy velvet booths of Sketch London. It birthed an adjacent color movement: rose gold, now available in everything from makeup brushes to iPhones. It’s why during summertime on Instagram you can expect to see many, many iterations of glasses of rosé in front of a cityscape at sunset and/or a large body of water.

I love pink. I am a woman of my generation, and there’s something about it that makes me ineffably happy. I’m about to move into a new apartment and my Pinterest board for inspiration has–you guessed it–a lot of pink. And wood floors, white marble trays and enough houseplants to make a greenhouse… but point is I really want the blush bedding and the nude velvet bed and the rose-gold mirror. And yet I have never worn a pink dress to my office, even though it’s been nearly 5 months since I started working there. And yet sometimes I hesitate to go to the pretty, floral strewn cafés because they feel ‘too pink’. And yet I cringe every time I see the cutesy, saccharine, poorly designed pink paraphernalia that is used to market anything from skinny tea (fun fact: it’s a laxative and pink is used to hide the fact that you spend hours in misery on the toilet) to sketchy online business courses (I made six figures in just six months and I’m the only person in the world who can teach you how).

Part of what makes my relationship with pink a bit uncomfortable is what is known in marketing as ‘shrink it and pink it’. Also known as making a product smaller and/or pink in order to sell it to women. The icing on the cake? It’s also extortionate: women’s products tend to have a markup of 30-50% to their male counterparts. This pink tax means that many products from razors to luggage are more expensive when marketed to women. The other half of the equation is the mixed messages we receive as women about social norms. For every message encouraging women to be feminine, wear makeup and be fashionable, we simultaneously receive messages belittling women who have an interest in traditionally feminine things. There’s a larger trend in which to some the best compliment to give to a woman is saying that she’s ‘not like other women’. Which, just so we’re clear, is as lazy as it is misogynistic. A cocktail of socialized pressure and price gouging makes me exhausted. And so often it weaponizes this beautiful, lovely rosy, shade. Is it any wonder that sometimes pink is a complicated color for me?

I think many women have a complicated relationship with pink. Either they don’t like it but feel pressured to, or they love it but feel guilty, like they’re giving into the stereotype. Writing this post helped me confront my own ambiguous feelings about Pantone’ s 2016 color of the year (a very pretty hue called Rose Quartz). For me it comes down to the fact that letting greedy advertising or sexist people stop me from doing anything I love is letting them win. So, along with writing this essay, I challenged myself to shoot this Chelsea and Walker pepto-bismol pink dress–and I felt freaking fabulous. With square toed black boots and big sunglasses, this pink puff sleeved wrap dress says, “I’m not worried about impressing you, I’m worried about you impressing me.” Wearing a bright pink dress unironically is a power move. It’s the sartorial equivalent of BDE. It’s the knowledge that not only are you a badass, you’re a badass wearing pink.