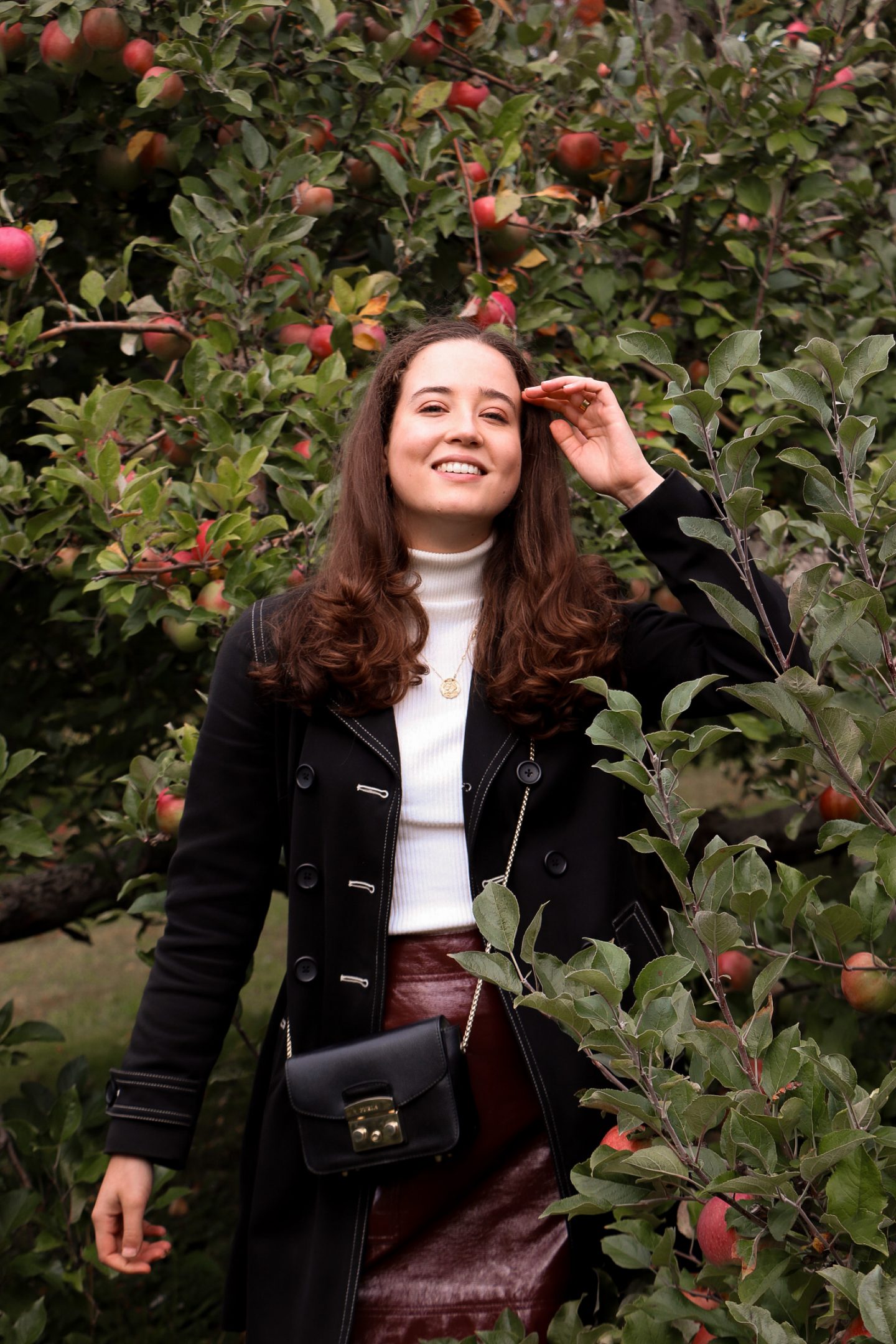 The best thing I’ve done in the past eight weeks was undoubtedly our trip up to Vermont. It was glorious. From the charming Middlebury Inn and small towns (straight out of Gilmore Girls) to apple picking and hiking up the ski slope, it was the perfect fall escape. While there were some logistical hoops to jump through (testing for COVID on either end, masked at all times, many coffee shops and restaurants were pick up only etc.) it was still a lovely time. If you are traveling, it’s important to follow recommended guidelines and common sense. Should you be in the mood for a change of scenery, I highly recommend driving through New England’s foliage and staying in a small B&B or rental, the later is especially helpful for cooking your own meals. Aside from frolicking in apple orchards, and generally doing my best Anne of Green Gables/ Jo March/ Lizzie Bennett impression, here are some fall favorites!

At the end of the summer the team at Good Molecules kindly sent me a few samples to try out. Since I have been incorporating their Niacinamide Serum and Silicone Free Priming Moisturizer. I used the Niacinamide both AM and PM to help minimize pores, as the weather gets colder, I think it would pair very well with hyaluronic acid serums for a dewy glow. I liked that this serum didn’t feel sticky on my skin the way other brands have. The Good Molecules Priming Moisturizer I use sparingly because it’s so rich, with shea and macadamia oil a little goes a long way. Typically, I use it after showering if I am staying inside or it’s night out but too early for my bedtime skincare routine. The brand has accessible prices, no animal testing and is very up front about their ingredients, using science rather than fear based marketing.

Mildly worried I will jinx myself by typing this, but my skin is the best it has ever been. I have a hunch one of the reasons for this is that I started double cleansing again using an oil based cleanser. Currently I am using the Badger Argan Cleansing Oil twice daily, followed by the Elemis Pro-Collagen Cleansing Balm in the evenings. I find this combination removes every trace of dirt, sweat, bacteria and makeup over the course of my day. Other cleansing oils that are great include Caudalie’s which smells lovely and the DHC Deep Cleansing Oil has a great reputation. It may sounds like a paradox but really to properly clean your face, oil is your best friend!

I have chatted about Sarah Flint heels before on le blog, but recently as a brand ambassador I got the opportunity to test out and photograph their new Perfect Dress Booties. They have the same expanded toe box, anatomical arch support, and hidden platform that made the Perfect Pump a cult favorite. Mine are the 60mm in taupe suede and they are great for when you want the comfort of a boot and the polish of a chic heel. These boots were indeed made for walking!

One benefit to staying at home more this fall is that I have been able to put a serious dent in my ‘to read’ pile. Which of course means supporting more local bookstores right? I just acquired a few more tomes from Petworth Loyalty Books, but Second Story DC, Lost City Books, Mahogany Books and Old Town Books are all great shops. One of my favorites was this novel by Kristin Hannah which follows two sisters as each navigate the occupation of France during World War II. The prose in was beautiful, and I learned about the partisans who helped down Allied pilots escape by hiking across the Pyrenees.

This was a delight of a book, a classic feel good romance with a quirky twist by Beth O’Leary. It tells the story of Leon and Tiffy- flat mates who have never met as they split their apartment to match each other’s day and night shifts. It made me feel nostalgic for London life, and was fast pace. Perfect to read on a drive or in the bath!

The Haunting of Bly Manor

Want to get into a spooky mood but don’t really like horror films? I loved this series on Netflix which felt more like a gothic romance in the style of a Bronte novel than gruesome jump-scares. It’s by the same creator of The Haunting of Hill House, but more eerie than disturbing. It also is set in the 1980s and has some great character references for style. In other words thanks to Dani I have decided I need a lavender sweater in my life STAT.

In the same vein, I recently watched the original Buffy the Vampire Slayer. The film came out in the 1992 and is peak 90s camp and grunge. It’s hilarious, so cringe it’s good and the vampires look like they wandered off the set of a glam metal band concert. If you’re a fan of the TV series, it has a completely different story line, but it brings a lot of the tropes you know and love, plus some gems.

Cozy is the name of the game, but if you’re tired of yoga pants, leggings and sweatshirts, and want to feel like a proper adult woman I have three words for you. Cardigan. Skirt. Set. I first spotted this gorgeous combo on Rose of Dadou Chic in sky blue. It’s in my shopping cart in the lovely oatmeal shade. What’s better is you can wear them together or as separates. Three outfits in one!

Since we are still at home most of the time, I’m still on a mission to fill every square inch with art. Most recently that includes a print of the film poster from Audrey Hepburn and Gregory Peck’s 1953 Roman Holiday. I found this version on Etsy, which is the Italian poster Vacanze Romane.

If you want to make your house smell like a fancy hotel, but are worried about leaving candles unattended by accident, diffusers are the best route. Frères Branchiaux products are locally made in Washington DC and the company, founded by three brothers, donates 10% of their profits to support homeless shelters nationwide. I found this dreamy scent called ‘This woman’s work’ (floral, vanilla and lavender notes) in my neighborhood Whole Foods but you can also shop directly from their site.

Grace Atwood on being a PANK (Professional Aunt No Kids)

In a recent and eloquent blog post Grace Atwood, discusses her decision to not have children. Even now, women especially face the pressure to become mothers or society assumes that it’s the default path. While many of us don’t know what the future holds, I hope that it becomes the norm for society to give women the space to figure out what they want, and that people accept women’s ability to forge their own path with grace.

Onyi Moss’s Personal Essay There Is Something Happening In Nigeria

I have had the pleasure of following Onyi Moss’s visual storytelling and honing of her craft over the last few years. Based in Manchester, Onyi emigrated from Nigeria to the United Kingdom in her twenties. As you likely have seen, Nigerian youth started a movement that has enveloped the entire country- End SARS. For some concise facts and news, I recommend this #ENDSARS post by So You Want To Talk About and coverage from major news sources like the BBC and New York Times. Onyi’s essay addresses the complexities of the crisis and shares her personal experiences with corruption in Nigeria and the frustrations felt by many Nigerians. It is an excellent and illuminating piece.

I love brunch. And pastries. And bread. So, I was about as excited as you might imagine when Tatte opened their doors in August. Their first location outside of Boston, the café is in a beautiful glass atrium in the West End. While their Parisian inspired restaurant is closed for dining in, you can admire their decadent pastry case and order for carry out or eat at the sidewalk café tables just outside.

I love a good podcast. I love Brené Brown. Last week she broke the airways by posting her interview with Joe Biden. There was so much that I loved about it, but my main takeaway was an uncanny sense of relief and joy that at least one presidential candidate is a kind man.

It’s officially less than 10 days before the U.S General Election. This will determine not only the future of the country over the next four years, but the ripple effects will affect our generation and all that follow. Many have mail voted already or delivered their absentee ballot to the drop boxes-like me! Please make sure you have a voting plan, whether you are doing so by mail, early voting or in person on November 3rd. If you are curious about the status of your completed ballot, you can track it online. Filling in those teensy, tiny circles I hoped for a better future for our country. One in which climate change, structural inequality and public health is taken seriously. One in which feminism, LGBTQ rights, racial justice and immigration are a top priority. One in which we live up to the better angels of our nature and build a future that we can be proud of!