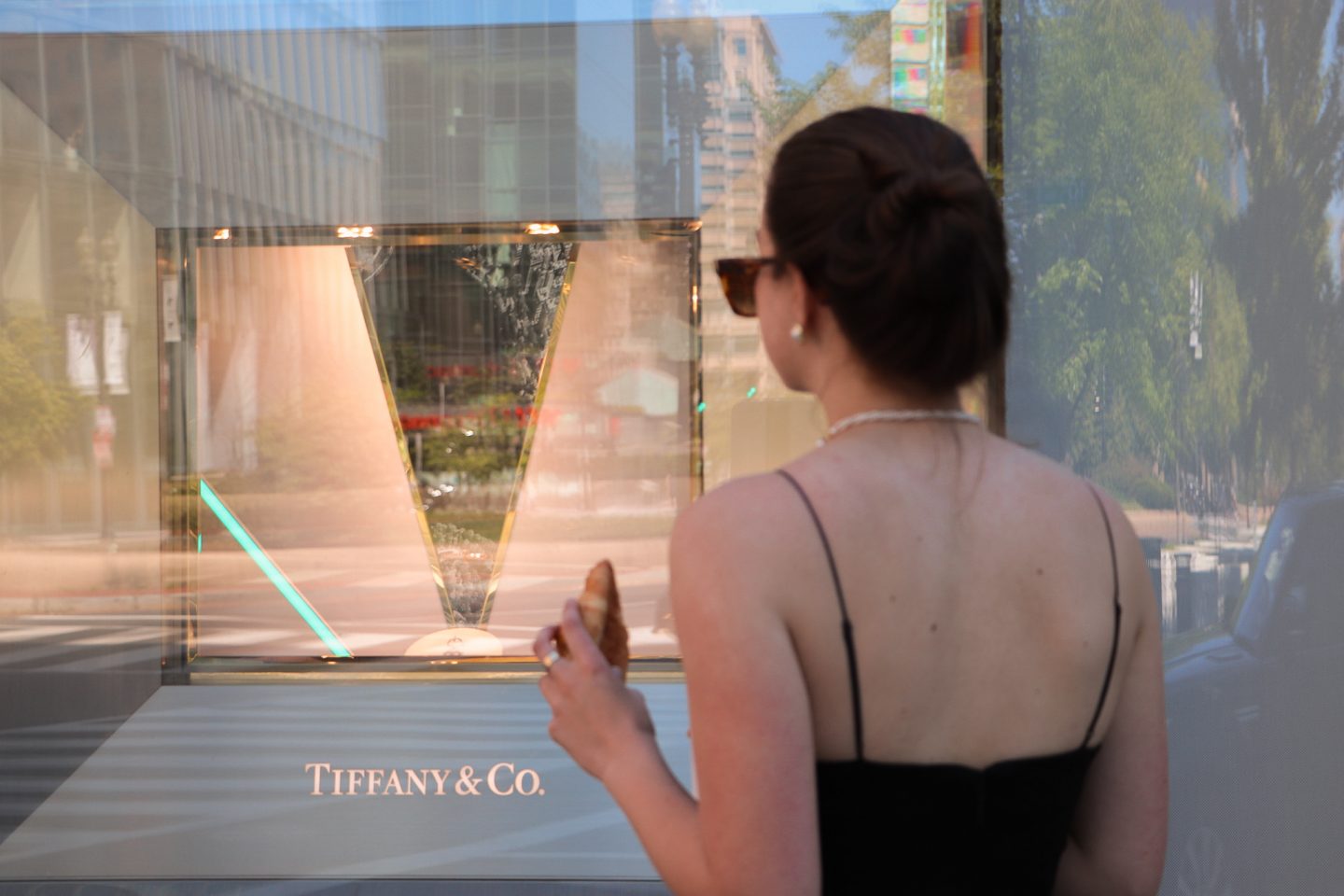 About this time last year, to stave off a descent into quarantine madness, and to put my overactive brain towards something creative, I recreated scenes from Breakfast at Tiffany’s (1954). Specifically, I did a Holly Golightly at home, imagining how Audrey Hepburn’s most famous character would have approached lockdown. Since I sadly don’t own her iconic Givenchy gown, it involved a mostly willing feline assistant (my older sister’s cat Pico) and an oversized white men’s shirt. So now, 12 months later, fully vaccinated and with mask restrictions lifted, I decided it was time to head down to Tiffany & Co to bookend the series. And much like my first recreation, themed around how Holly would approach quarantine (champagne bottles as grocery essentials, strumming Moon River on her ukulele, and trying to figure out how to walk Cat on a leash so she could stretch her legs), I decided this one also needed a little twist.

When brainstorming, standing in front of my closet and willing inspiration to appear, the strappy barely-there sandals my mother bought in the 90s and passed down to me nearly 30 years later caught my eye. If you squint, much of the classic 1960s fashion featured in the film isn’t all that different from the style du jour in the last decade of the twentieth century and first decade of the twenty-first. So, I hoodwinked my friend Marcella into helping, and we shot Breakfast at Tiffany’s as if Holly was a 90s It Girl. Since Starbucks burst onto the scene and catapulted to mega fame after going public in 1992 it felt fitting to snag my croissant and cappuccino from their nearby shop (it was incidentally the nearest coffee location and I didn’t want to walk further on my stilts, but we’re pretending it was my artistic vision all along okay). A messy bun rather than Hepburn’s elaborate coiffure, vintage pearl jewelry from my late grandmother Joann who likely wore these earrings and necklace in both the 60s and the 90s, and a strappy black midi dress from Cinq à Sept rounded out the look. Pssssssst the dress is called the Primavera (meaning spring in Italian) and it’s available on Rent the Runway for all your hot girl summer needs.

Not only was it fun to recreate one of my favorite films, but it felt so good to be out and about again, people watching and getting out of my comfort zone by shooting somewhere so public. My day was further made by the fifty-something lady from New Jersey who walked by and said, “honey you nailed it, so Audrey”. All ramblings aside, I hope you enjoy this photo series, and it gives you some style inspiration. Over the next few months as we bar hop or host a house party, popping champagne and sipping martinis, half feeling like we’re forgetting something, I recommend channeling the joie de vivre and insouciance of Miss Holly Golightly. She of the unforgettable line “I will not accept drinks from gentlemen who disapprove of me. I’ll pay for my own whiskey and don’t you forget it!” And, after a long night out, maybe take a stroll with your coffee and croissant in the early morning light. Xx